Project description: expand capacity of sewer lines between squirrel creek and retention basin west of south haven elementary school. This project included 800 linear feet of improvements to the roadside ditch, and 1200 feet of 54” relief sewer between the end of the ditch to the school’s basin, and abandonment in place the existing 36” storm sewer. Installing the new infrastructure will allow the redirection of storm water to the existing and improved flood storage basins for improved storm water management.

Prior to the construction of Old South Haven, Squirrel Creek once flowed through this area in its original stream channel. The old stream channel of the creek was filled in during the construction of the subdivision and most of the flow from the creek was diverted into the storm sewer. Squirrel Creek, with a drainage area of approximately 150 acres, generally flows west to east toward McCool Road, where it connects to the existing storm sewer system. During significant storm events, the nearby roadside ditches will overtop and flow eastward through the neighborhood. Based on the XP-SWMM modeling, roadway overtopping occurs for storm events equal to or greater than a 5-year recurrence interval. There are two flood storage basins located within this watershed: (1) at the southwest corner of the intersection of McCool Road and Midway Drive and (2) adjacent to the South Haven Elementary School, which receive the drainage areas of 198 acres and 276 acres respectively. Both of these facilities have dry bottoms and are adequately sloped for drainage.  As documented in the Old South Haven Collection System Rehabilitation and Capacity Planning Plan completed in 2012, there are numerous flood problem areas identified in the neighborhood east of McCool Road, with many of these located along Long Run Road. In addition, there are documented surface flooding issues along Millport Drive, which are caused in large-part due to the roadside ditch overtopping McCool Road.

The plan below displays the work completed for this project, which includes 800' of roadside ditch improvements and 1200' of storm sewer pipe installed. The blue polygon represents the school's storage basin to which the storm sewer outlets. These storm water infrastructure improvements have alleviated future flooding issues for the school and the surrounding residents! 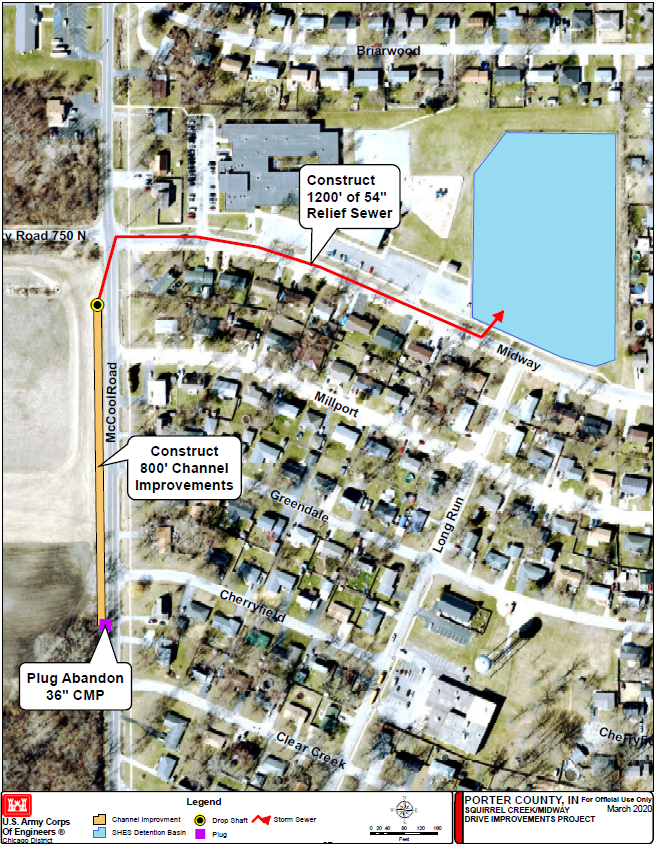 Porter County partnered with the US Army Corps of Engineers - Chicago District to fund this project. The project is authorized under section 219(f)(12) of the Water Resources Development Act 1992, Public Law 102-580, as amended Section 502 of WRDA1999, and by Section 108 of the Consolidated Appropriations Act of 2001. Section 219, as amended, allows the Army Corps of Engineers to provide planning, design, and construction assistance for carrying out water-related environmental infrastructure projects in select areas. The project under this authority are cost shared 75% federal and 25% nonfederal sponsor. The federal funding amount of $1,500,000 was allocated to this project. The nonfederal sponsor: the nonfederal sponsor is Porter County, IN. The county provided 25% cash match of $491,666. Construction contract information: contract was awarded to De Boer Egolf Corporation of Portage, Indiana, in September 2020 for $1,268,687. Field construction began May 2021 and was completed in August 2021.